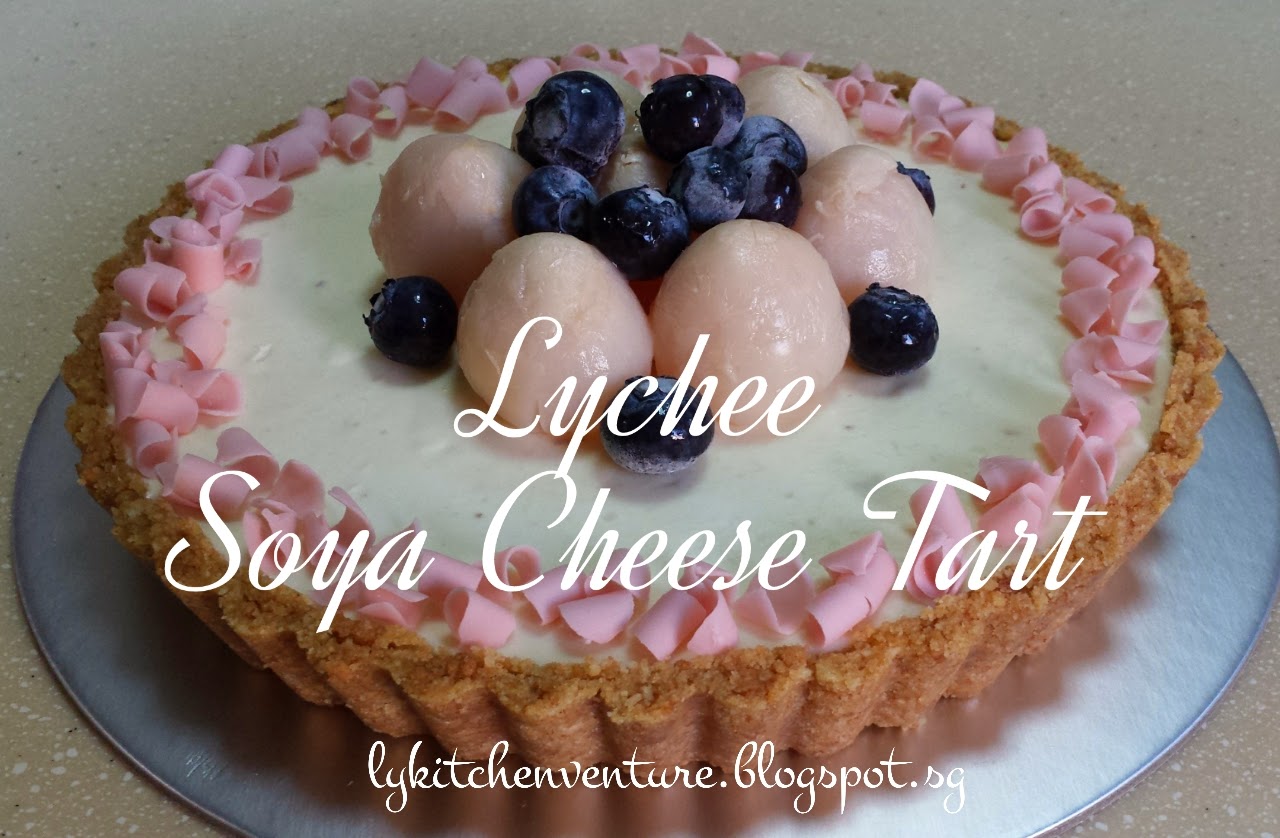 My daughter had a babysitter during her first 2 years before going to childcare. She calls her Mommy Margaret. Mommy Margaret and the whole family doted on my girl and even till now we still keep in close contact. For her birthday this year, I decided to make her a Lychee Soya Cheese Tart.

Margaret and her family liked the Soya Tofu Cheesecake I made for them previously and I decided to make another cheesecake variation for her birthday this time round. I wanted the cheesecake to have Soya in it, but I also want it to have a refreshing flavour. Hence, I attempted to add lychee and soya powder to make a cheese tart since the Lychee Cake that I made for my colleague and mother-in-law was also well received.

I added soya powder to both the base crust and the cream cheese mixture, and added pureed canned lychees to the cream cheese mixture. The lychee syrup didn't go to waste either as I used some of this to bloom the gelatine for the gelatine syrup.
It was with abated breath when I waited for feedback when everyone started eating the cheese tart. I was so glad that thumbs up were given!

This is a really refreshing dessert to have!

Method:
1. Mix biscuit crumbs, soya bean powder & melted butter together and press firmly with the help of the back of a spoon onto the base and sides of a 7" tart pan and 6" tart pan.

2. Chill in the fridge for at least 30 minutes.


Method:
1. Double boil lychee syrup and gelatine over a water bath till the gelatine is completely dissolved. Set aside.

2. Whip the dairy whipping cream and 15g sugar till stiff and set aside in refrigerator.

3. With an electric mixer, beat cream cheese and 40g sugar until smooth and creamy. Add in pureed lychee, soya bean powder and gelatine mixture and beat until well mixed.

4. Fold in the whipped cream to the cheese mixture and mix well.


Assembly
1. Pour the cheese filling into the prepared crust pans. Cover the top of the pans and chill in the fridge overnight to set.

2. Remove from the tart pans, decorate as desired and serve chilled.

Note:
1. Before serving, I decorated the tart with some canned lychee (whole), blueberries and chocolate shavings.
2. To get nice and clean slices, wipe your knife in between cutting each slice.