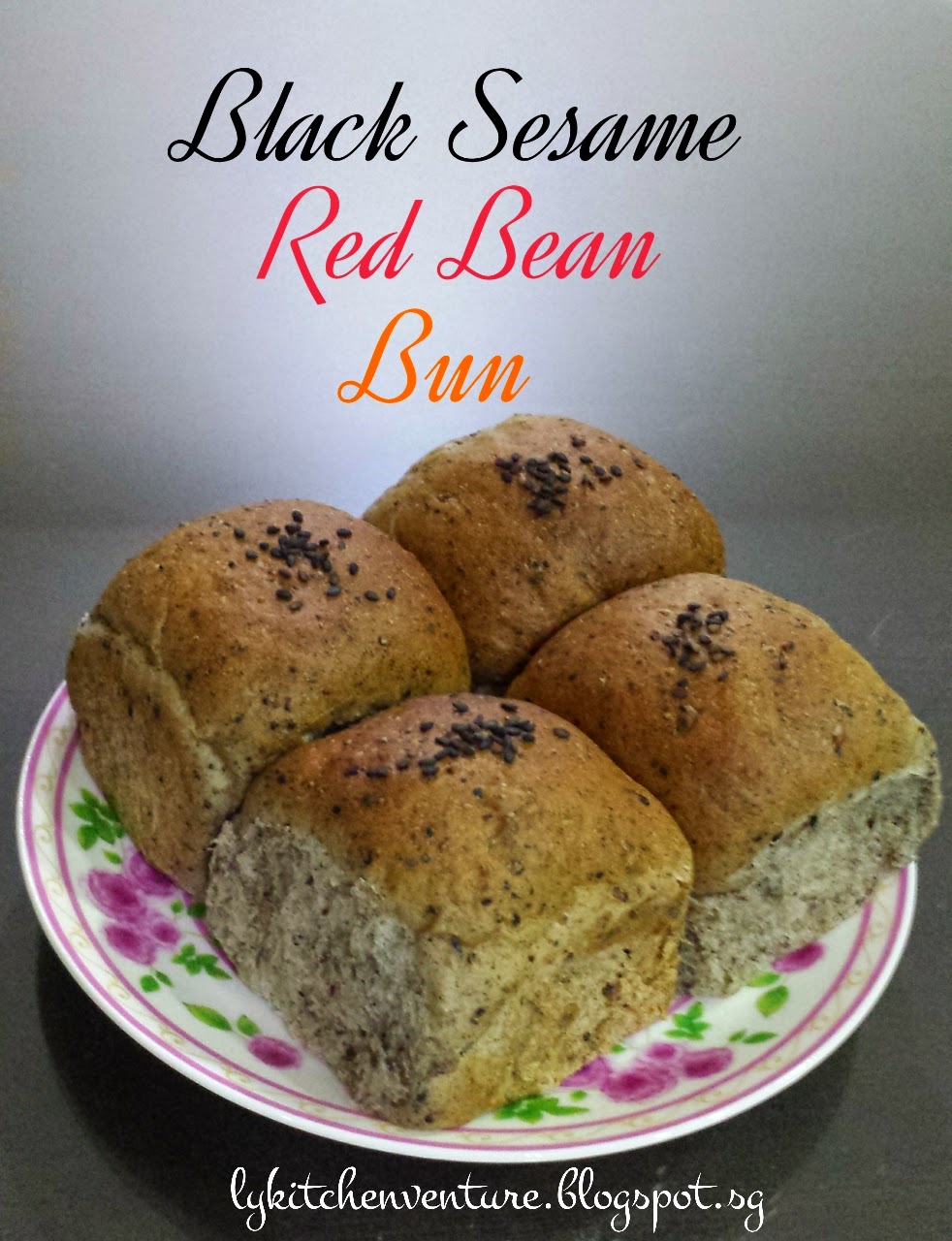 I was at a bakery at Fortune Centre the other day oogling at their wonderful creations and deciding what bread to buy, simply because they have so many interesting types of breads. One of them that caught my eye was black sesame with azuki bun. Since I've run out of bread for breakfast, I decided to try baking some Black Sesame Red Bean Buns.

Again, I adapted the Wu Bao Chun's (吴宝春) Champion Bread Loaf I did earlier. I used my food processor to blitz the black sesame seeds to add into the flour and as usual, all the kneading was done by my trusted Zojiroshi breadmaker.

When the first round of proofing was over, I divided the dough into 10 portions. I rolled each portion into a ball, flattened to a disc and placed the red bean paste fillings before wrapping the rolling into a ball again. These are then proofed for a second time for about an hour. Before baking in the oven, I sprayed some water over the surface and sprinkled some black sesame seeds over the buns for decoration. 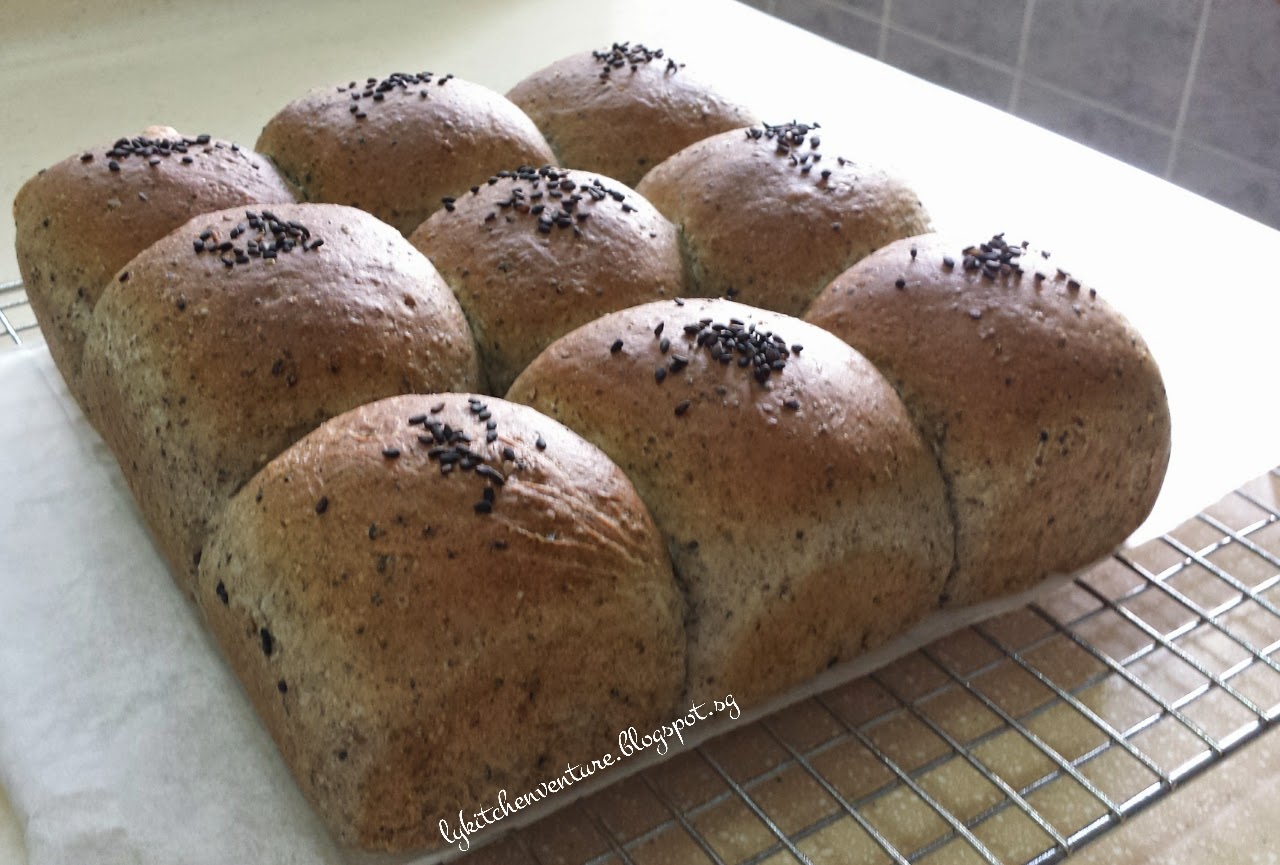 I love the end result. Loved it even more when I saw my hubby and daughter enjoying them for breakfast! 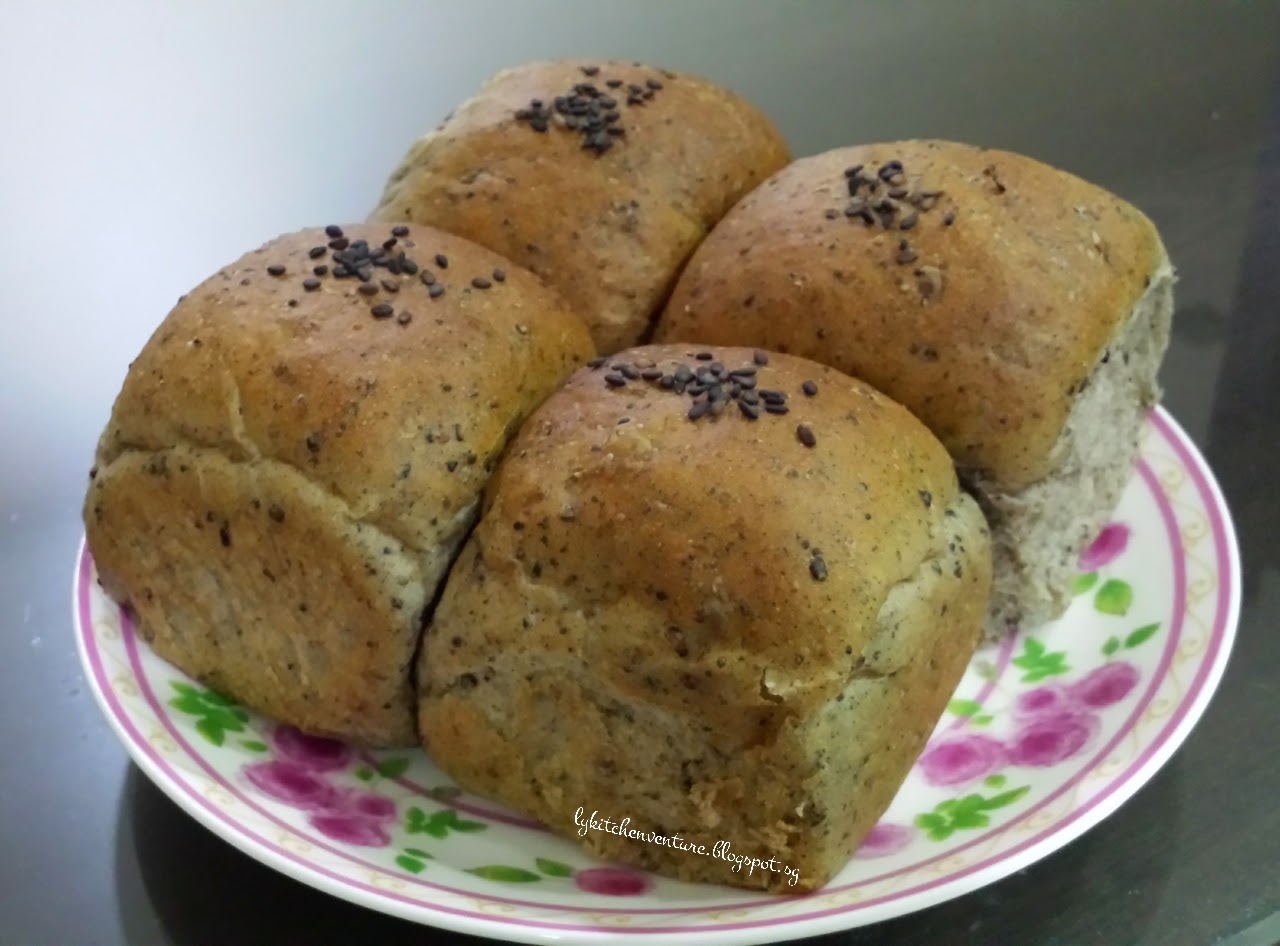 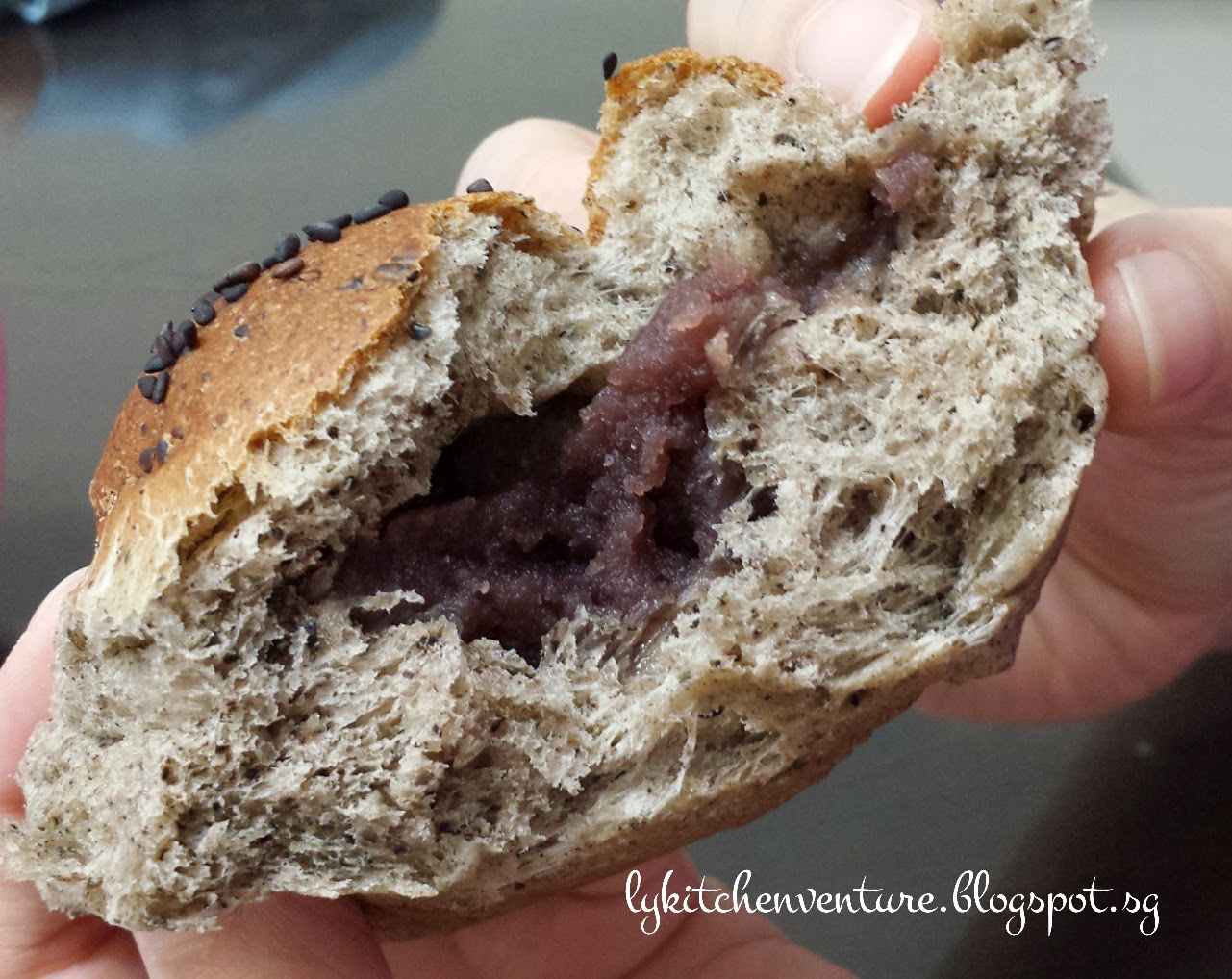 For the Filling
Red bean paste (Bought from Daiso, divided into 10 portions) 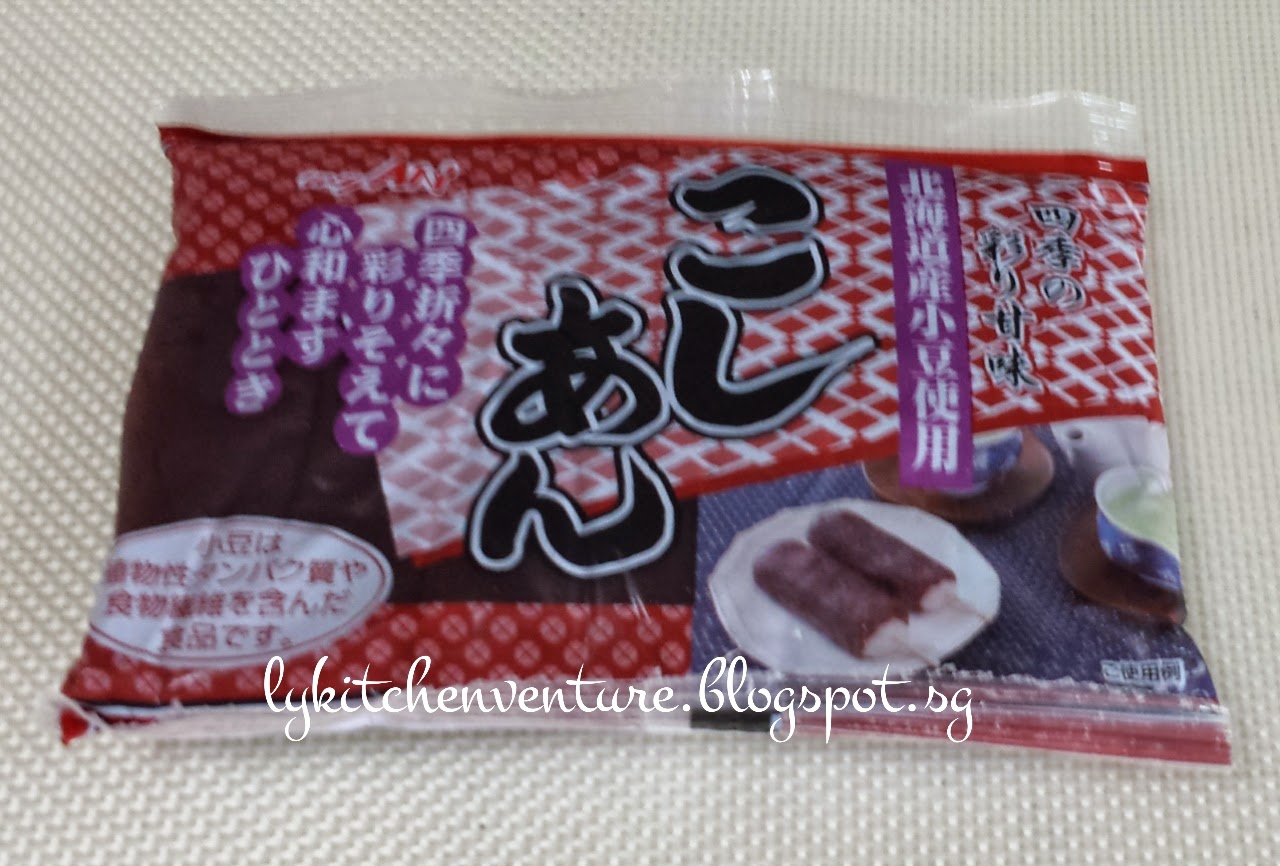 Method:
For the Bread Dough
1. Place all ingredients into the pan except butter based on the sequence listed above or by following your breadmaker manufacturers' instructions regarding the order of liquid/dry ingredients.
(I'm using Zojirushi breadmaker. I placed all the wet ingredients first, followed by the dry ingredients. Make a dent at the centre of the flour and pour the yeast in the dent last, making sure the yeast does not touch the liquid, sugar and salt.) 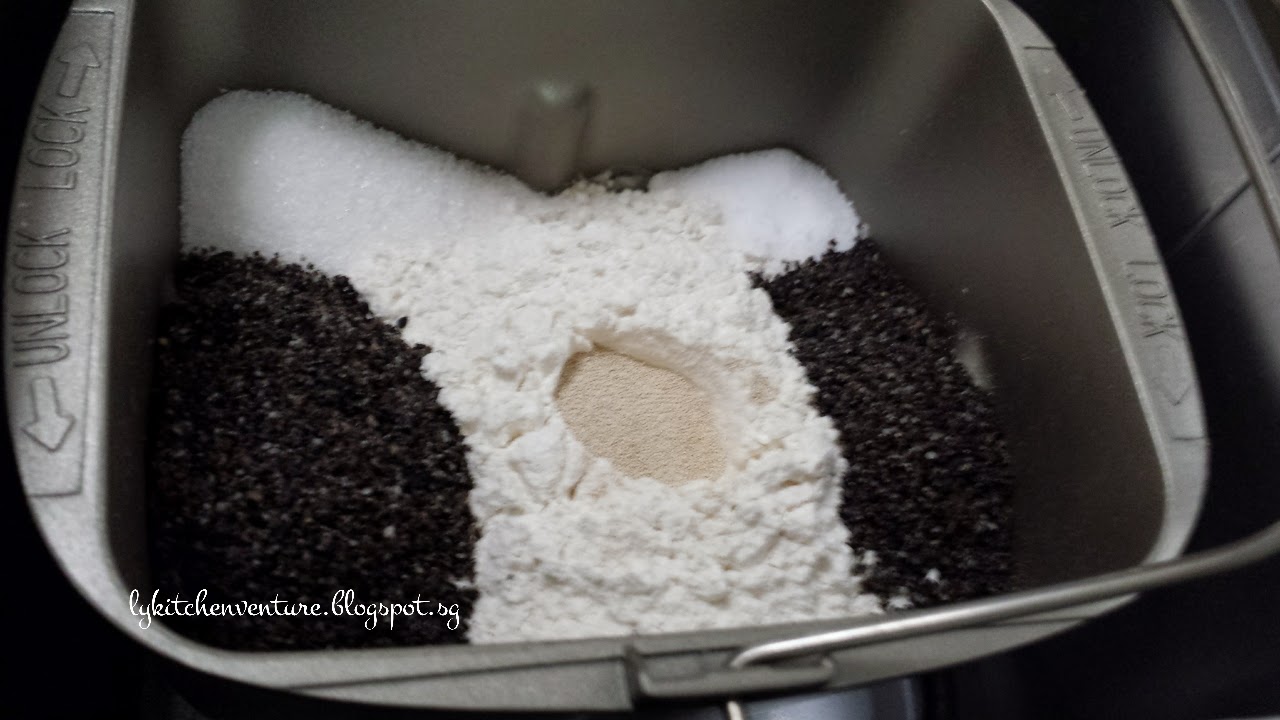 2. Make the selection for 'Pasta Dough' setting on your breadmaker.
(For my Zojirushi breadmaker, I chose the 'Cookie/Pasta Dough') 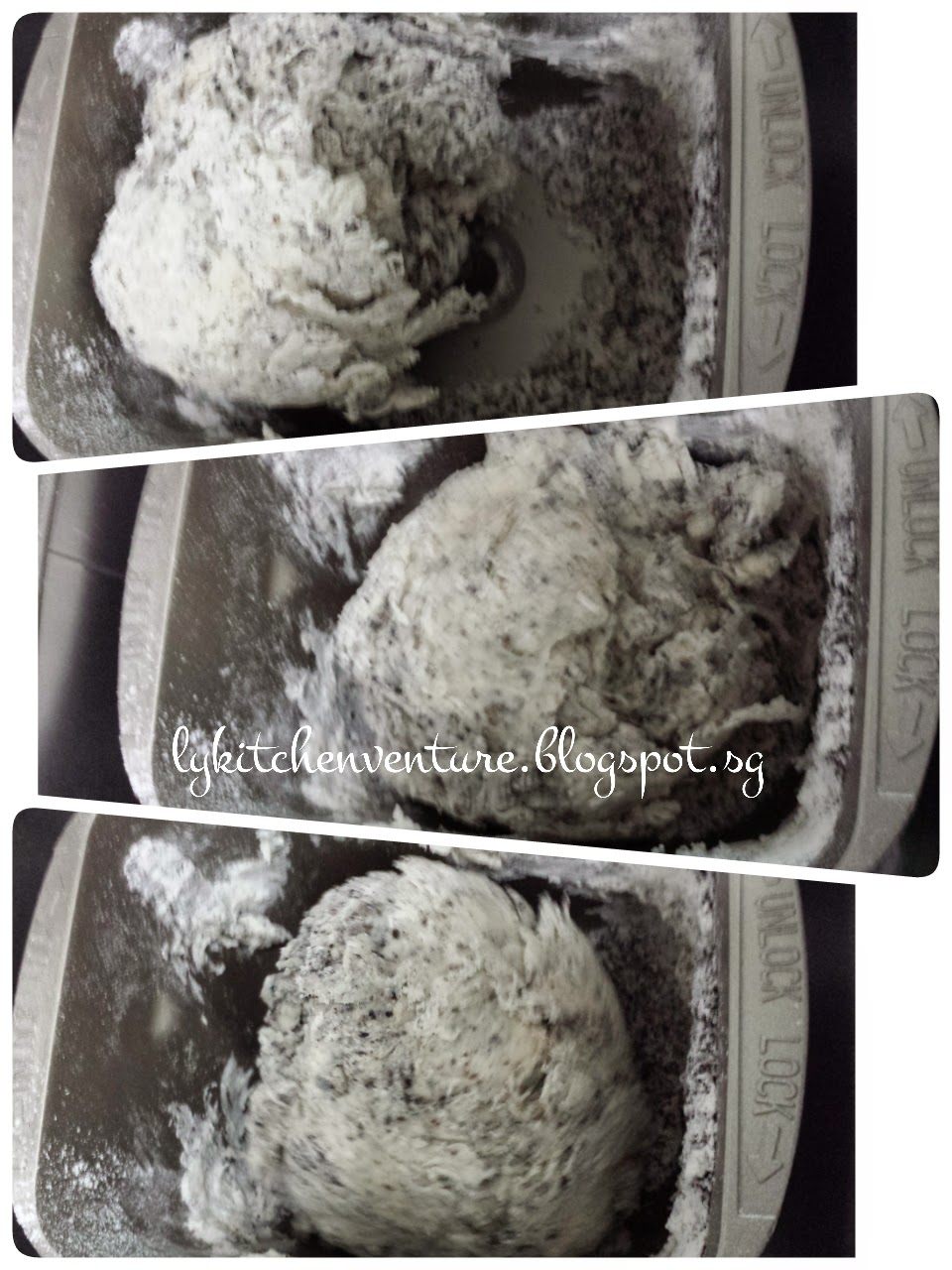 4. After the machine has finished its course of kneading under 'Pasta Dough' setting, make the selection for 'Dough' setting.

5. Press start and the machine will start kneading the dough after resting for 15 minutes. Add in the butter during this resting stage. 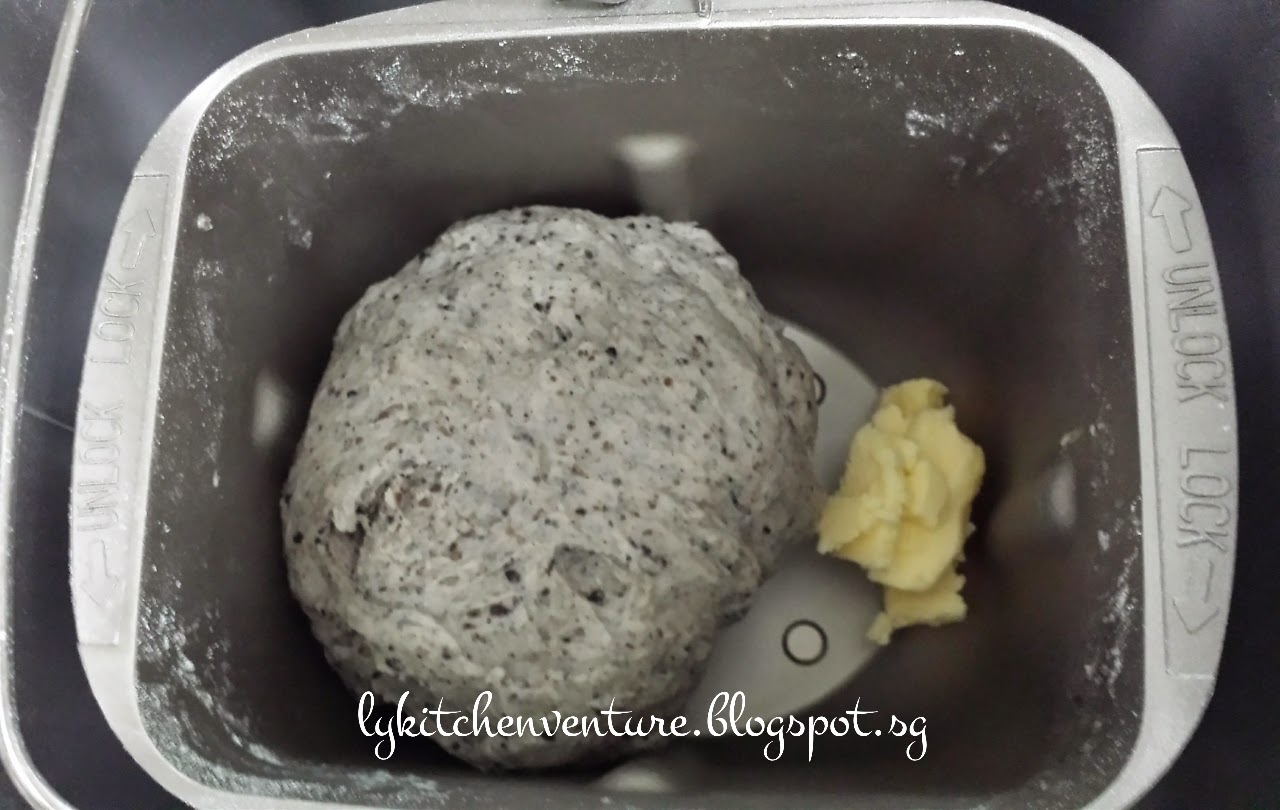 6. Let the breadmaker do the rest.

7. When the bread dough is proofed, the machine will beep to signal the end of the 'Dough' function. Remove dough from the pan, punch it down and divide into 10 portions. 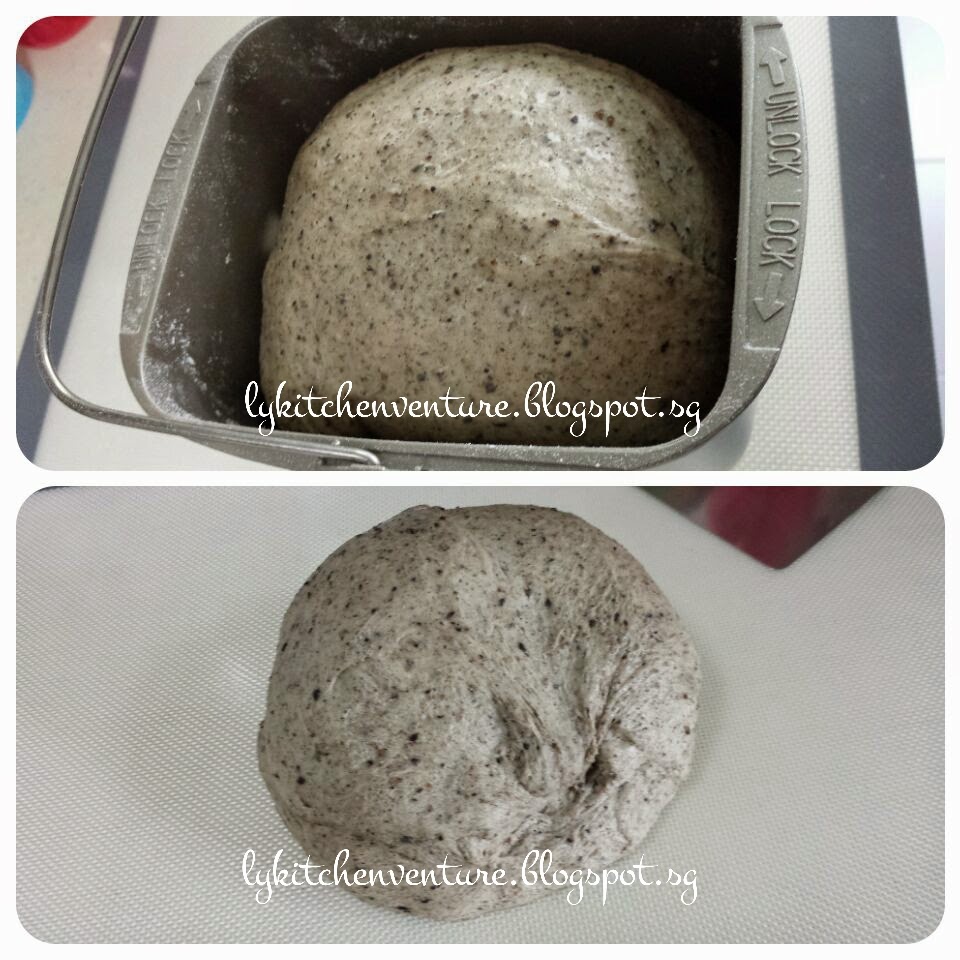 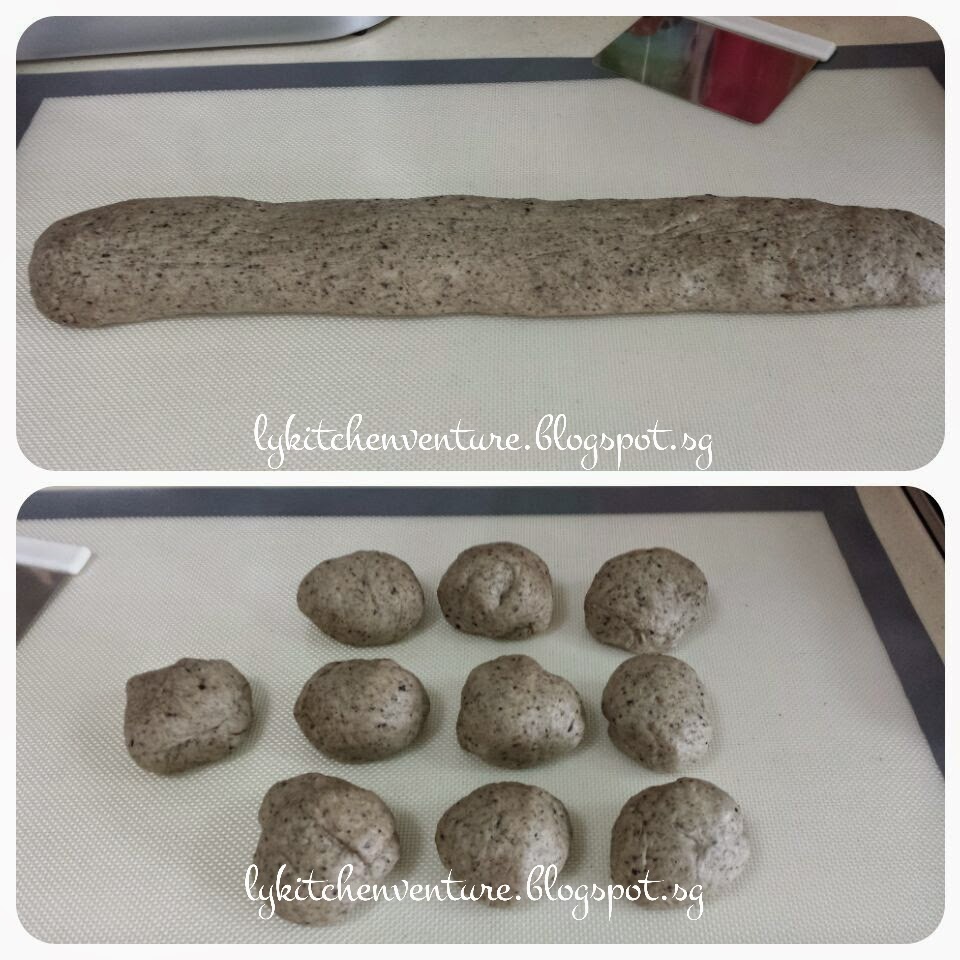 8. Roll up each dough portion into round balls and rest for 5 minutes.

For the Bun
9. Flatten each ball into a disc (can either use a pastry rolling pin or the palm of your hands) and put the red bean paste filling in the middle, wrap and seal. Put in a 9" square tin (you can also put in individual paper bread casing) and let it proof for another hour. 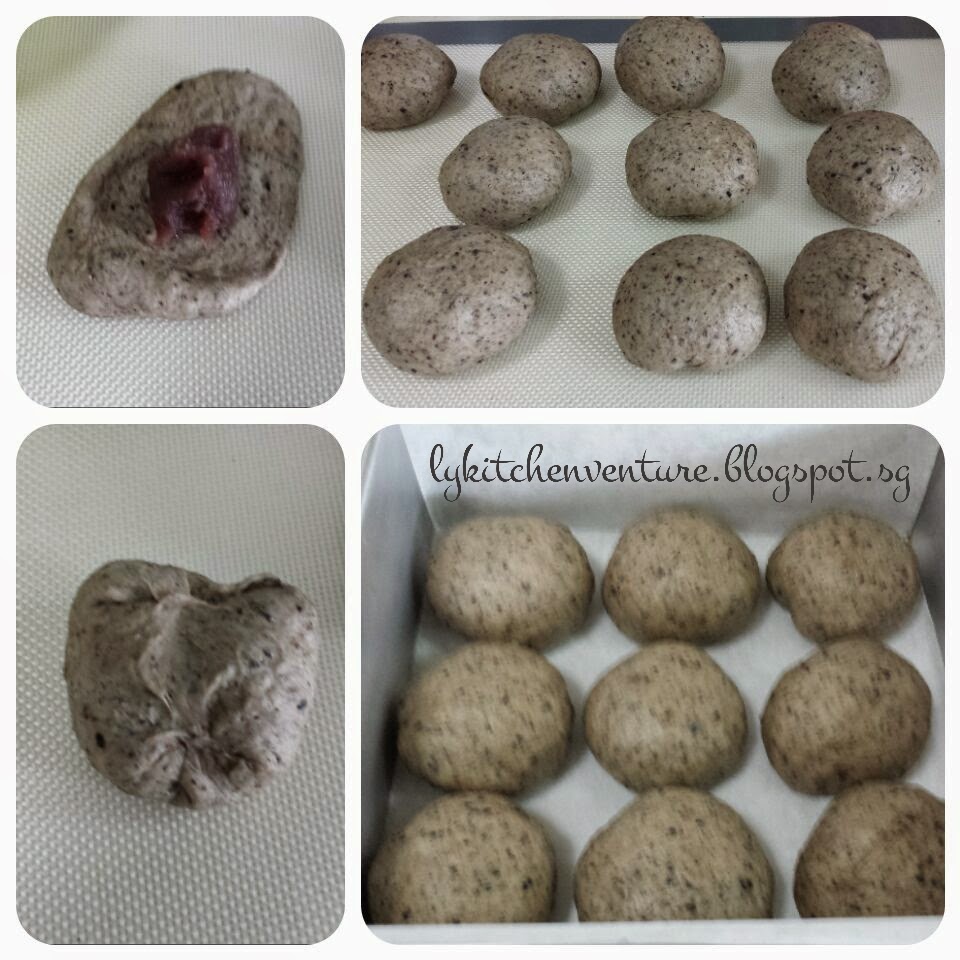 10. Spray the bun with water and sprinkle some black sesame seeds over. 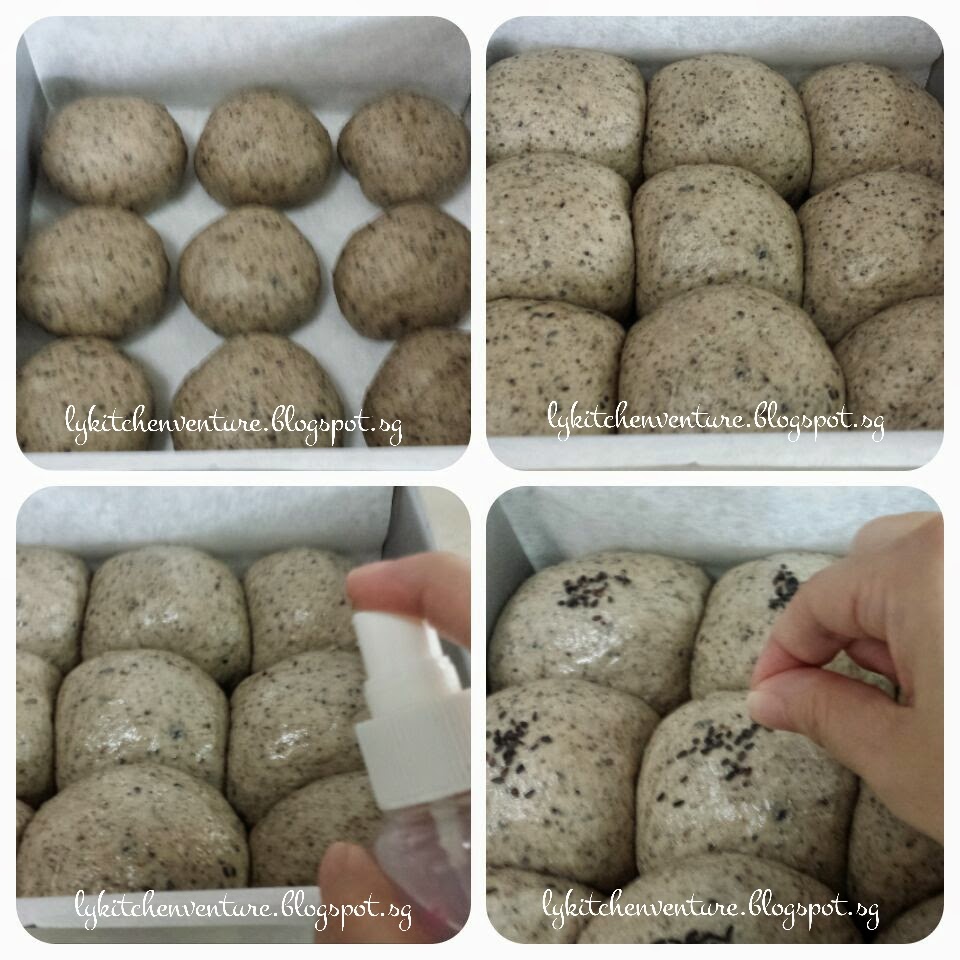 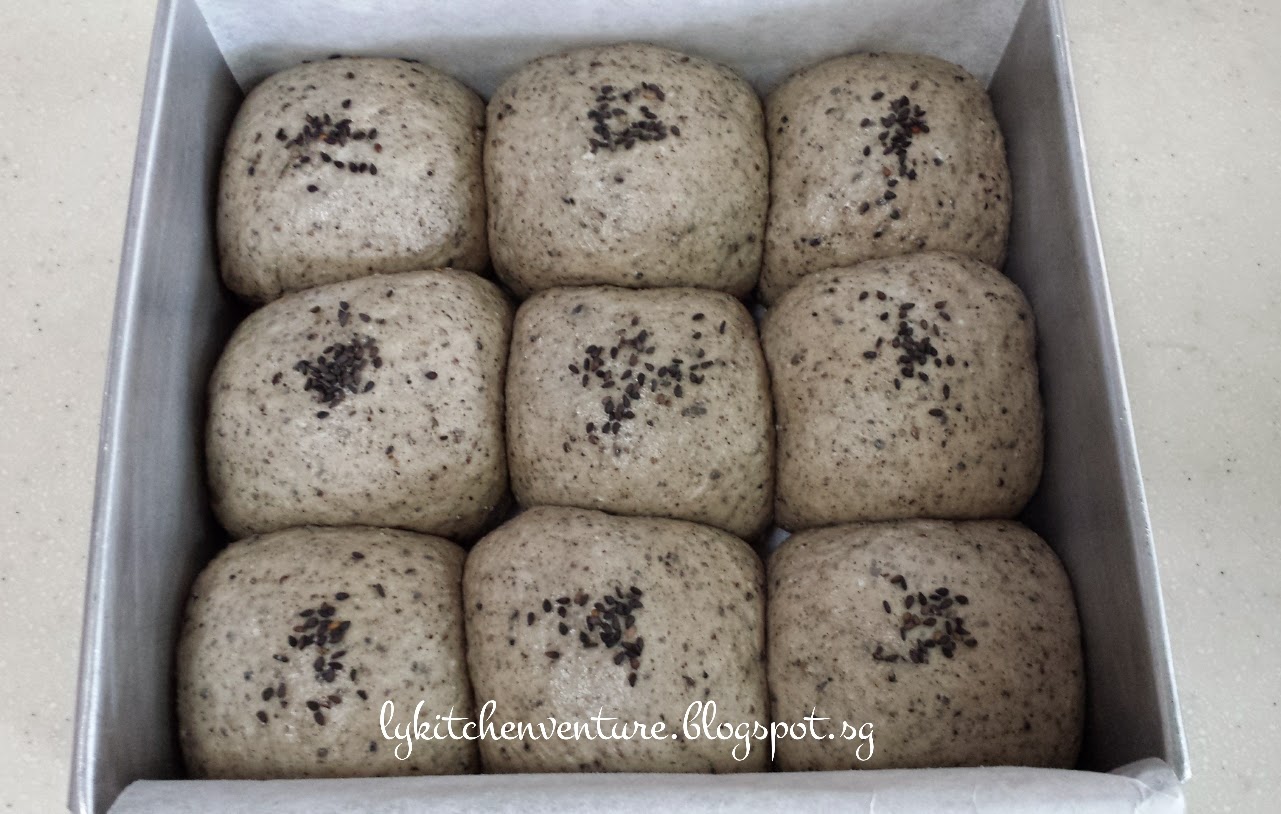 12. When the buns are done, remove from the oven immediately and let it cool on a wire rack. 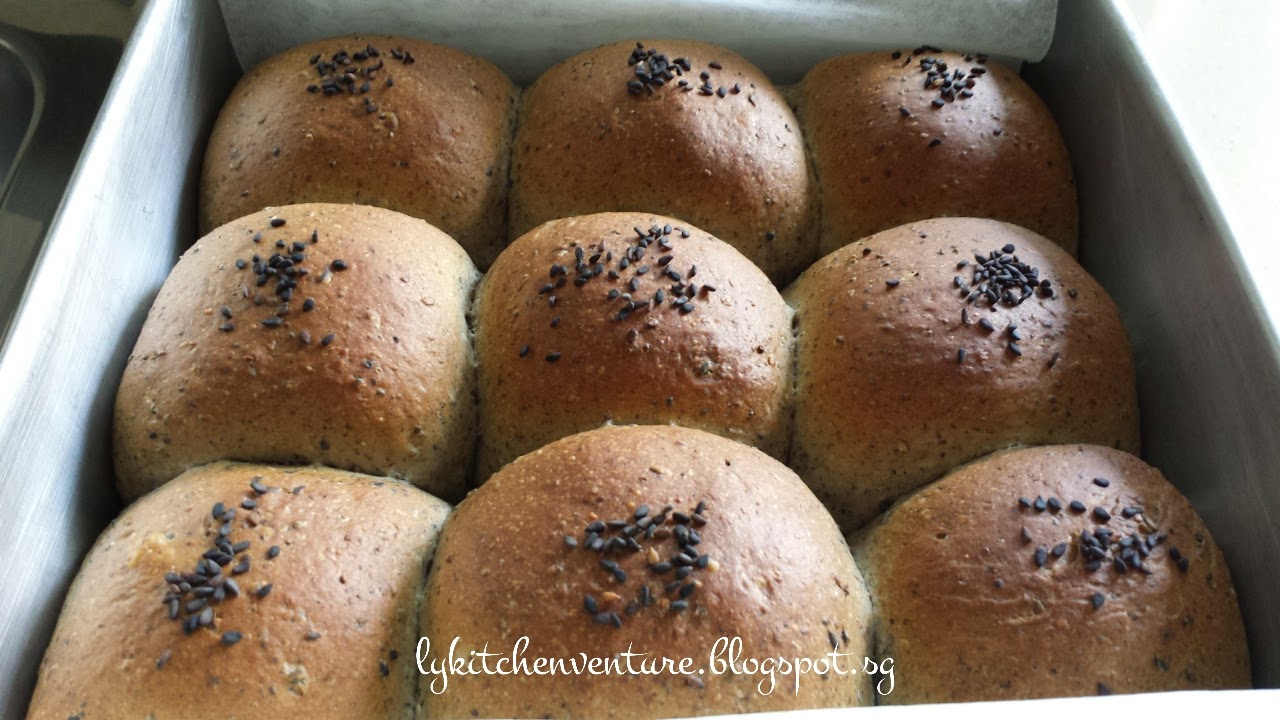 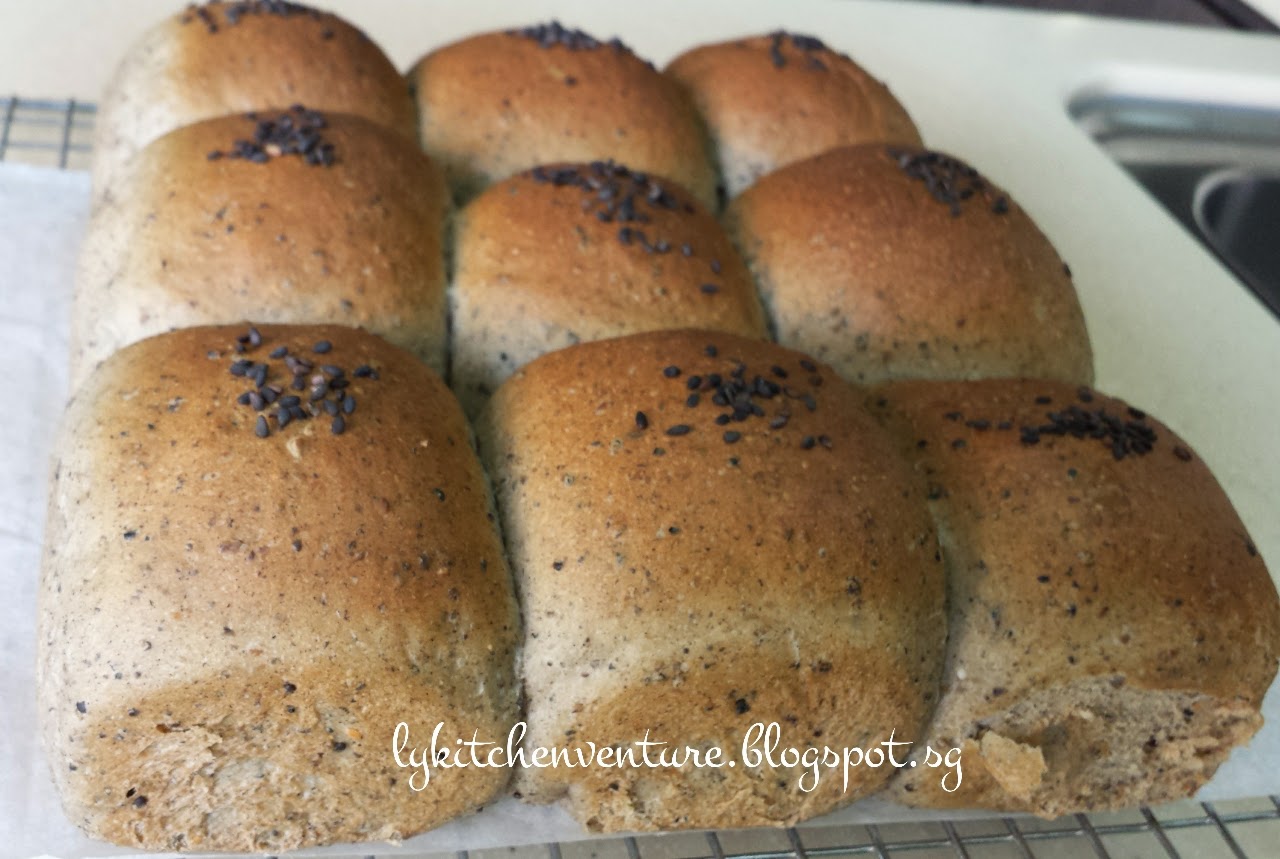 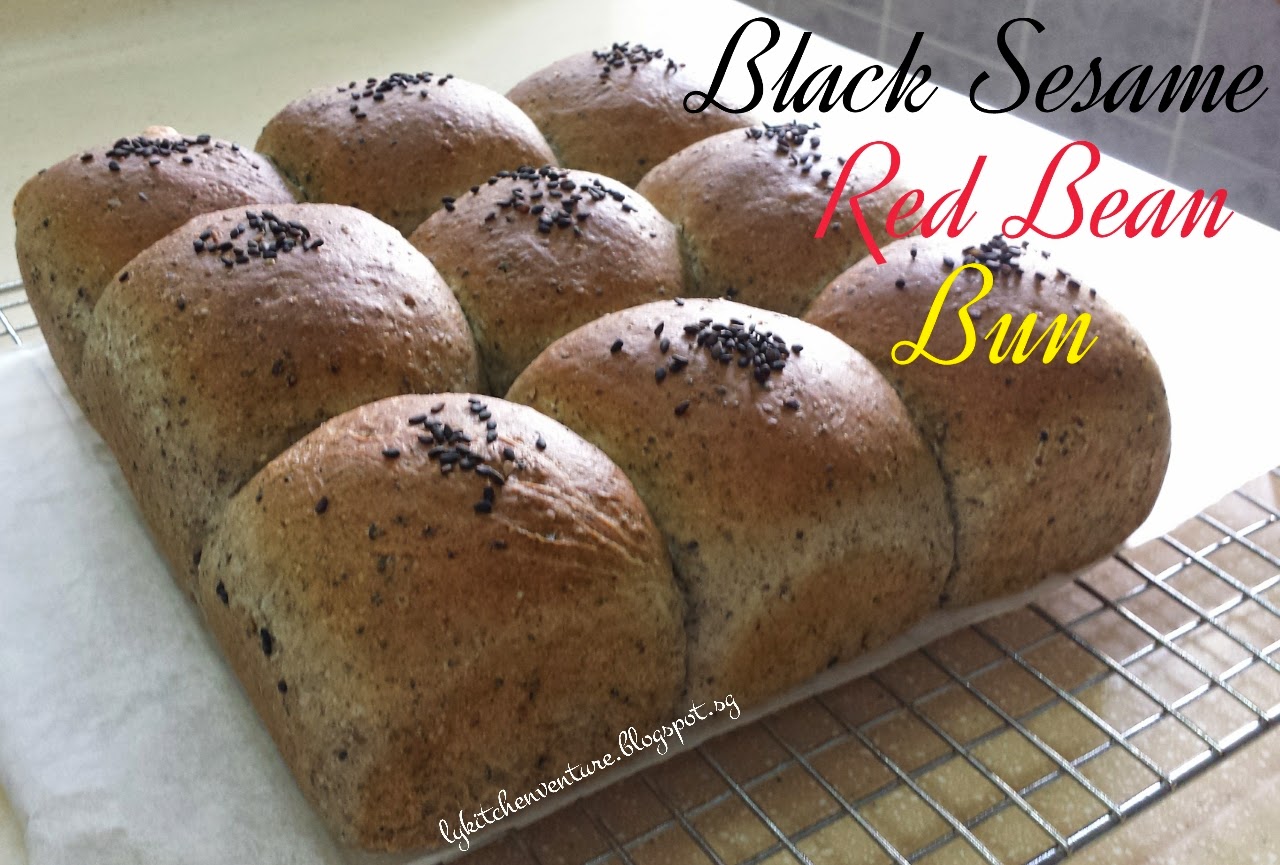 Do link back to LY's Kitchen Ventures if you have used any information published in this blog.